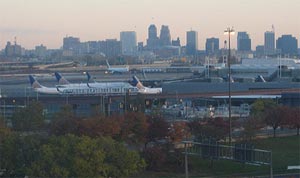 Newark, New Jersey’s Liberty International Airport is undeniably one of the busiest airports in the United States. Rental cars there seem freakishly expensive if you’re used to traveling in the middle part of the country, and the means of finding decent rates on those cars can be tricky. But now two gentlemen, Robert Harrison and Michael Espejo, have partnered to launch the brand spanking new NewarkAirCarRental.com.

I fly in and out of EWR very frequently, but I seldom rent cars. Next time, I may give this website a shot.

According to the press release,

Michael discovered Newark Liberty International Airport (EWR) when he recently traveled to New York City from the mid-west. He found EWR to be less crowded than other New York area airports, and he was able to reach his rental car destination quickly due to convenient AirTrain service. Further, Michael found he could be in midtown Manhattan (just 16 miles from the airport) in a few minutes.

Michael is right. You can get to the city super fast from Newark. However, the AirTrain is kind of a pain in the neck (it’s outside of security and frequently on the fritz) and record delays make flying in to any NYC airport an ongoing challenge.

The press release goes on to finish the story with,

When Michael returned home he called Robert, who lives on the West Coast, to report his discovery of the Newark airport. East Coast travelers probably never realize that only La Guardia and JFK are familiar to west-coasters. Michael thought there needed to be a better website for Newark airport car rentals. Robert, a web designer, was happy to accept the project with his friend. Hence, NewarkAirCarRental.com was born.

Newark Air Car Rental offers booking on all major car rental agencies, with competitive prices. After five easy steps, you have information on the complete rental cost including all charges and taxes. This website offers you all of the standard upgrades and options, in an easy to use interface. Vehicle comparisons include photos of each vehicle. The final step confirms the rental will be waiting on your requested arrival date at EWR. You do not have to provide any personal information or credit card information at the time you book your vehicle. That information becomes necessary only when you pick up your reserved vehicle at the agency desk.