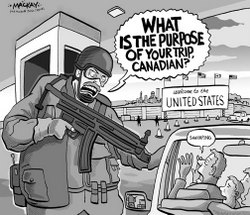 U.S. Customs and Border Protection Commissioner W. Ralph Basham announced today the enrollment
center at Montreal’s Pierre Trudeau International Airport is open for travelers interested in applying for the NEXUS program, which expedites travel for members between the United States and Canada. Passage kiosks will be operational in the coming weeks.

An enrollment center in Toronto opened earlier this month where a NEXUS kiosk is also operational. Expansion to the Edmonton, Calgary, Winnipeg, Ottawa, and Halifax airports is expected by the end of 2007.

NEXUS in the air mode meets the requirements of the WHTI air rules. A NEXUS card can serve as an alternative to a passport when traveling to the United States by air at designated airports.

For more information, visit www.cbp.gov and click on the “Travel” tab.