O’Hare: Airport to Avoid in the Winter? 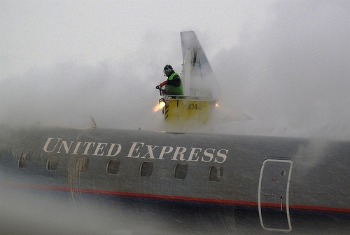 Anyone who’s been to Chicago during its cold winter knows that there are better times of the year to visit the city. Summer can be nice, but it can also be too hot – Chicago is another one of those places where visiting in the shoulder seasons is often the best option.

The trouble is that even if you’re planning a trip to Chicago in April, you may be going through Chicago in the winter months. It’s not just the flights to ORD, after all, that pass through Chicago’s massive O’Hare Airport – it’s a major hub for flights out to other destinations around the country and the rest of the world.

What does O’Hare’s standing as a big hub airport have to do with the best time of year to visit Chicago? Well, even if you’re doing your best to avoid going to Chicago for a trip – either work or pleasure – until the weather isn’t horrible, you may end up waylaid in Chicago by bad weather during a wintertime trip to somewhere else completely if your flight passes through O’Hare. There are travelers who purposely avoid airports that are notorious for weather delays – notably O’Hare and SFO – but sometimes you just can’t avoid it, and then you run the risk of getting stuck.

If you’re lucky enough to have business you could do in Chicago at any time of year, you could take the opportunity of getting stuck in Chicago by bad weather to visit some customers – it’s a great way to make lemonade out of lemons, but it doesn’t mean there aren’t any hassles involved. Foremost among them is the accommodation question. You’re not the only one impacted by a flight delay or cancellation, after all, and those hotels near O’Hare airport are the first ones to fill up in those situations.

Those familiar with Chicago will know that it’s easy to get into the city itself using the Blue Line – in a short 40 minutes you’re downtown, without worrying about fighting traffic or paying a high cab fare. Then you’ll have your pick of any of the cheap hotels in the city.

Of course, it only takes one time getting caught on an unexpected overnight in Chicago to make you think twice about booking a trip with a transfer at O’Hare in the future.