Pay by Phone Service in NYC with Near Field Technology 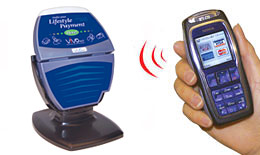 Cingular is testing a new-to-the-U.S. service in New York allowing customers to pay for everyday items using their cell phone with near field technology. Incidentally, we are WAY behind other parts of the world with this type of technology. It has been available in some European locations and Japan for several years already.

How does it work? Using MasterCard’s PayPass technology. That’s the same deal that lets cardholders waive their cards in front of a scanner to make purchases, like in the marathon commercial. Cingular has paired with MasterCard, Citigroup and Nokia to make it happen. A MasterCard PayPass radio chip is installed in the phone, allowing the user to swipe their phone (rather than the standard PayPass card) at retail locations who accept PayPass. The chip sends payment information to the receiver and charges the user accordingly. Charges are added to the users cell phone bill.

In addition to retail locations, the 4, 5, and 6 lines of the NYC subway will be outfitted with receivers, allowing users to wave the phone in front of a sensor to pay the subway fare. This is probably my favorite part of the deal. Using your phone as a payment source, there is no need to periodically check the balance and “recharge” your subway card.

Once this technology becomes widespread (and I think this will eventually take the place of plastic), it will offer a new challenge to business travelers. It will be interesting trying to distinguish personal from business expenses, especially if your company pays your phone bill. I could see employers moving more to a Per Diem reimbursement plan than requiring itemized expense reports. It would just be easier.

By the way, this is the same type of technology that will allow hotel guests to use SMS messages as electronic room keys rather than a key card.