People You Meet on the Road (Murfreesboro, Tennessee) 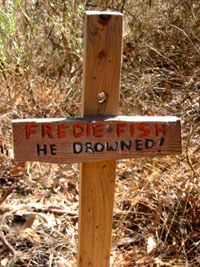 In Murfreesboro, Tennessee, I ended up one night at some steakhouse where the local ‘golf community’ residents reside for happy hour every night. I had the pleasure of meeting several people and hearing about the crazy cat man. I bet kids say this guys house is haunted… It’s hard to believe anyone could own 114 cats in an entire lifetime. Particularly for someone like me who is much more of a dog fan.

Apparently, upon entering the bar, I sat a few seats down from a man who not only owned 114 cats, but had them frozen in his home.

Had I know this at the time, I may have put more distance between us than just a few bar stools. He was supposedly keeping them frozen in order to bury them in a pet cemetery he planned to build, found, create – whatever it is that you do to start a pet cemetery. According to my new Murfreesboroians (or whatever they’re called) friends, the land he intended for the use was in some sort of title dispute. So he froze his beloved, deceased pets for safekeeping until the land became available. He wasn’t mass murdering the cats, they died of natural causes. Actually, many of them were diseased and reproduced and the descendants were diseased – a vicious suburban cycle. This would probably make a good commercial for spaying and neutering your pets. Kind of like the scary 1990’s “your brain on drugs” campaign, except for with pets.

It’s really misguided, but incredibly sad as well. From drinking with a rocket scientist to sitting down the bar from a person convicted of animal cruelty, you just never know who you’ll meet on the road.

Don’t believe it? I didn’t. There was an article in the Tennessean.