Saying Goodbye to Back to the Future 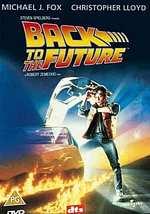 The Back to the Future ride at Universal Studios Hollywood will be closing its doors forever on Labor Day this year, September 3, 2007. To celebrate the end of an era, fans will have the opportunity to win one of the 1981 DeLoreans. Wow, I didn’t know there were any still around. The DeLorean was, if you don’t remember, the inspiration for Doc Brown’s flux capacitor-equipped time machines.

What could possibly take its place? A new The Simpsons ride is slated to debut in Spring 2008. Doh.

According to the press release, “Fewer than 10,000 DeLorean automobiles were built at the company’s Northern Ireland factory. The car was notable for its futuristic design, including a stainless steel exterior and top-opening gull-wing doors. The 1981 DeLorean that Universal Studios Hollywood will give away has been driven with just over 60,000 miles. Officials at the studio are unable to estimate how many millions of years the vehicle has traveled in the space-time continuum.” Uh-huh.

If you’re a fan of the movie and you’ll be in the L.A. area, go to UniversalStudiosHollywood.com or visit the theme park to register to win at the “Back to the Future” kiosks.