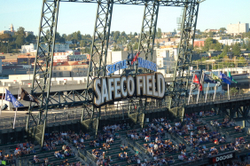 We at the Business Travel Logue continue with our dedication to all things baseball. Despite being REALLY tired in Seattle last night (I’m on east coast time), I made my way to the Mariners vs. Angels game and was pleasantly surprised. When you think of teams with great records, teams who have a shot in the post season, teams who have dominated the sport, Seattle just doesn’t come to mind. But despite that fact, the city has the very best baseball fans I’ve seen this year. It’s the stuff baseball movies are made of.

The game started out with Al from Tool Time throwing out the first pitch. I can’t think of a better representative for that job in the entire Pacific Northwest. Very cool. And the fans were with it from the very first, cheering and supporting their team. And they weren’t really negative to the opposing team, which was a nice change from the Braves and Yankees games I went to earlier in the season. The only idiosyncrasy was that they DEMANDED home run balls from the opposing team be thrown back on the field. I didn’t catch one, but if I did I would have caught hell as well. There is no way I would toss back a perfectly good home run ball, no matter who it came from.

Guess what you can do at Safeco? You can order food directly to your seat via text message. I’m not sure if that’s really cool, or just really lazy…but I’m thinking really cool. I’ve never seen this at another park, but I may not have been paying attention. I probably should have opted for the delivery, as my Domino’s cheese pizza was cold and just not good.