Shut up and Drive: Cell Phone Bans in the U.S. and Abroad 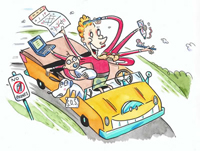 As business travelers, it is incredibly important for us to be able to keep in touch with our office, family and clients while on the road. I consider my driving time to be my conference time. Often, it’s the only time during business hours I have when I’m not in some sort of meeting. I didn’t know until recently that one of my frequent stops, Chicago, Illinois, has a ban against driving while using a hand-held cell phone. Not that big of a deal for me, I have a phone with bluetooth and use the headset regularly. If I did something stupid like forget my hands-free at home? I could have received a $50.00 fine. I get enough toll violations in that town to be pretty inclined to avoid any other fines. I don’t know about you, but my company won’t reimburse me for tickets.

As of today, four states and the District of Columbia have restrictions on hand-held mobile phones in use while driving. Several states have allowed bans in cities within the state, but do not have statewide laws.

Most of us don’t drive when traveling overseas, but if you do check the laws for the country to which you’re going.

For more information, visit Cellular News. Need a hands-free device? Check out Amazon, Buy.com or Overstock (you can even get Northwest airline miles at Overstock if you go through the NWA website).