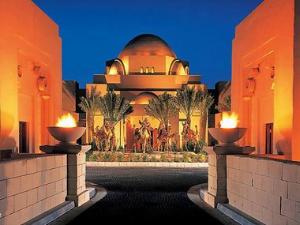 Those of you who think 5 stars are for commoners will be happy to hear ProfessionalTravelGuide.com, who I’ve never actually heard of before this press release, is cranking things up a notch with a new 6 star rating for hotels and airlines in the summer of 2009. According to the press release, “The new category will be added to the industry’s official Five Star Rating System, the Star Service, which is owned and operated by ProfessionalTravelGuide.com.”

The star rating we all know and love was developed by Star Service back in 1939. Those of us in the United States generally consider this the rating system for hotel properties, though other countries don’t use the system as much.

ProfessionalTravelGuide.com will delve into its extensive hotel database to choose hotels for the six-star designation, a select group of exclusive luxury hotels that represent the new crème de la crème of the hotel industry, setting the gold standard that all hotels should strive to attain. This robust database consists of more than 160,000 hotels and 10,000 of the world’s most in-depth hotel reviews, which are based on anonymous inspections from 325 professional reviewers located around the world.

What makes it a six star property? The powers that be looked at 1700 criteria, including cultural and emotive factors, to determine which hotels make the grade. Among many other factors, the following were considered:

I’m a little disappointed that environmental friendliness isn’t a consideration, though it may be one of the 1695 that weren’t specifically listed in the release.

Whose in the running? Thus far the following hotels are being considered for the 6 star status:

So, we’ll see if the new extra star takes off.