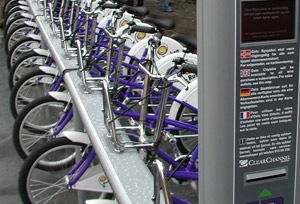 Smart Bikes D.C. is a new program starting in Washington, D.C. that allows members to utilize “smart bikes” found throughout the city. This program takes the eco-friendliness of car sharing one step further by totally eliminating emission from the equation. And just think of the time and money you’ll save on parking.

This idea is revolutionary, but only in the United States. Bike share programs have been available in European cities such as Paris, Copenhagen and Amsterdam for some time.

Bikes are available in 10 locations around downtown D.C. and can be borrowed in increments of 3 hours. Members must then return the four speed to a Smart Bikes kiosk. The sign up fee is a rock bottom $40 per person. If you’re safety conscious, bring your own helmet. They are not provided by the D.C. program. With your start up fee, you’ll receive a card that lets you unlock the bikes from the kiosks. Be sure to lock it up while in use, you are liable for bikes that are lost or stolen.

According to Andy Clarke, executive director of the League of American Bicyclists, “We always go on about how Americans have a love affair with their cars, but I’ve always felt they also have a love affair with the quickest, easiest, cheapest, most convenient way to get around.” Preach on, brother. If I can save some time by biking instead of riding, I am more than happy to do so. Of course you’ll have to watch out for those lazy Americans who will drive around the grocery store parking lot for half an hour trying to score a closer spot to the door, though.

Jonesing for a bike share program in your city? If you think of the “green cities” of the United States I’m sure you can guess where you’ll see the next bike share programs. Seattle, Portland and San Francisco top the list for future sites.