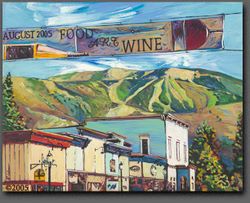 Steamboat Springs, Colorado is getting ready for the Fourth Annual Wine Festival, to take place from August 2 – 5, 2007. I like a wine festival, and this sounds like a fun place to drop in if your travels take you to Colorado in the early part of August (mine will not, as I plan to be at home celebrating my birthday).

The festival brings in more than 100 international and domestic wineries and top-notch chefs from around the nation. Mmmm…food and wine.

The Opening Reception is held at the top of Thunderhead. The anticipated Grand Tasting is held on the Torian Plum lawns at the base of the Steamboat Ski Area with live entertainment and a Steel Chef Competition. During the festival, you can sample more than 250 wines and an host of culinary delights as part of the Stroll of Steamboat on Main Street. The weekend also features a seminar program hosting some of the world’s greatest wine experts, an all-star celebrity chef line-up and vintner dinners.

This year, Stephen Asprinio and Dave Martin of Top Chef fame will be in attendance.

If you’re staying with ResortQuest at either Torian Plum and Trappeur’s Crossing Resort, you can look forward to a private wine tasting, featuring artisan cheeses provided by Steamboat’s renowned Vidalia Market. These wine tastings are complimentary and coupled with special Steamboat Wine Festival lodging rates, starting at $159 per night.

Torian Plum Wine Tasting: 4-6pm at the Torian Creekside Guest Reception Lounge. The Torian Plum and Opici wine company are proud to present four award-winning wineries from Italy and Spain. Matt Sharpe from Opici wine company will discuss the individual philosophies of each winery and some of the strides they are taking to make a difference in the world of wine such as: Solar powered Barbarescos; Restoration of 16th century Amelia castle (Umbria); Organinc and spectacular Priorat (Spain); and 60-90 year old Mourvedre from Jumilla, Spain.

Trappeur’s Crossing Resort Wine Tasting: 4-6pm at the Trappeur’s Guest Reception Lounge. Trappeur’s Crossing Resort and Old Bridge Cellars stage a group of Australian winemakers who retain their belief in artisan winemaking. Respecting the land and with minimal intervention in the winery, their wines remain true to the soils from which they come. Chris Rowe from Old Bridge Cellars invites ResortQuest’s guests to come and savor some of Australia’s finest McLaren Vale, Rutherglen, South Australian wines and more.

ResortQuest’s Steamboat Wine Festival lodging package can be booked at ResortQuestSteamboat.com or by calling (866) 634-9616.