Techno Borders. Boeing is Creating a ‘Virtual Border’ Between the U.S. and Our Neighbors 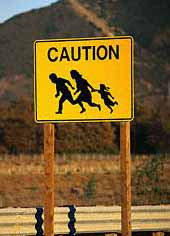 If your business travel consists of sneaking illegals over the border, you’re going to hate Boeing. Boeing Integrated Defense Systems has been contracted by the Homeland Security Department, to the tune of 2 billion dollars, to build a 6,000-foot “virtual fence” along the U.S. borders with Mexico and Canada. According to Businessweek:

The heart of the fence is 1,800 sensor towers equipped with radar, cameras, and other gadgets to help Customs & Border Protection detect and prevent unwanted visitors from entering the U.S. With Boeing’s (BA ) help, BusinessWeek presents the first tour of Homeland Security’s virtual fence:

UNMANNED AERIAL SYSTEMS (UAS)
— A single agent can launch and control a UAS, also known as a drone airplane, which weighs as little as 10 lbs. and can track suspects within a 6-mile range for up to 90 minutes.

— Kollsman Inc. is the leading contender for the contract.

SENSOR TOWERS
— Rising 80-ft. to 200-ft. tall, depending on the terrain, they come with radar equipment that can spot and home in on movement.

— DRS Surveillance & Reconnaissance Group (DRS ) is building the first nine towers, Kollsman is providing the electro-optical and infrared cameras, and L-3 Government Services Inc. (LLL ) is constructing the base.

SATELLITE PHONES
— Agents will be able to talk, get data and possibly video anywhere in the world without losing their signal, even in canyons or other places that don’t have cellular towers.
— Iridium Satellite will set up the system.
— Motorola (MOT ) leads the pack of contenders vying to provide the phones.

I’m really not sure how this is supposed to work, but it’s interesting. It seems kind-of like the same principle of cameras helping catch people who run red lights, but I’m pretty sure the border crossers won’t be wearing license plates for easy identification. If the border patrol doesn’t have the resources to patrol the border properly, will they actually be able to follow up on each incident using this system?

Also, does that mean we can’t brag about having the longest unfortified border in the world anymore? Virtual fortification. That sounds like a trekkie term.