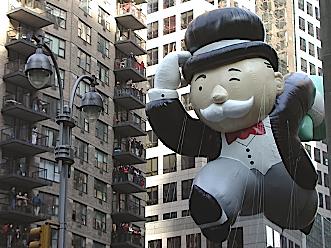 If you can’t be home for Thanksgiving, I can’t think of a better place to be. New York City offers a whole host of opportunities for travelers to the city during the holiday season.

One of the first things that comes to mind when you think of Thanksgiving is the Macy’s Thanksgiving Day Parade. The big event kicks off at 9am at 77th Street and Central Park West, where the gi-normous balloons and floats line up alongside high school bands and cheerleaders. From there, the parade meanders though Columbus Circle downtown and ends up at Herald Square to finish up at noon.

If you’re around on Wednesday (the day BEFORE Thanksgiving), you can check out the legendary Macy’s balloons. They’re inflated at the American Museum of Natural History beginning at 3pm. I definitely might have a look at that if I’m in town.

The Big Apple is one expensive city, but many New York hotels offer special packages for the holiday.

The Alex Hotel offers a package starting at $399 per night plus tax for deluxe accommodations, which includes breakfast for two people and a 3pm late checkout. This deal is good from November 18 to the 22nd.

Hotel Thirty Thirty has a special that offers a third night free after paying for two nights during the period of November 18-23. That would be a great deal if you could arrange some business on Tuesday and Wednesday, get work to foot the tab and stick around for an extra night for the festivities.

The Mandarin Oriental Hotel features the I Love A Parade package. This one is available from November 19 to 25. It’s for the high rollers only, starting at $809 per night. For that price, you get exclusive access to the hotel’s 6,000-square-foot ballroom with continental buffet breakfast and parade views on Thanksgiving day, complimentary upgrade to a Hudson River view room and a welcome amenity of caramel apples and cider.

The Marmara Manhattan is offering a family deal priced at $1,799 for a family of four. It begins on November 21 with checkout at noon on November 25. The package includes four nights’ accommodation in a one-bedroom suite; a gift basket from Eli’s Vinegar Factory, a nearby outpost of Zabar’s; gourmet Thanksgiving dinner for four catered by Eli’s Vinegar Factory; four complimentary tickets to the American Museum of Natural History; and four $10 MetroCards. Interesting.

The New York Marriott Marquis is offering a three-night-minimum Thanksgiving Day Parade package, with arrival on November 20. The Marriott’s package includes a deluxe room, buffet breakfast on Thanksgiving morning and good views of the parade as it passes through Times Square. This one will set you back $949 per night plus tax. To reserve, book on the Marriott website and enter promotional code TD1. To reserve by phone, call (800) 228-9290 and ask for rate Code TGJA. Why couldn’t they make the codes the same?

The Ritz-Carlton Hotels of New York has the ultimate Thanksgiving experience by providing the perfect spot for the entire family to experience the Macy’s Thanksgiving Day Parade followed by a Thanksgiving dinner upon returning to the hotel. With this deal, you’ll receive a private second floor indoor skybox viewing (floor to ceiling windows) of the parade on Columbus Circle, which also includes elaborate gourmet buffet breakfast for two. Unless the weather is horrid, I really think you should be outside to enjoy the parade. Maybe that’s just me. The Thanksgiving Parade Fantasy Package is a three-night package from November 21 to the 24th. It starts at $3,375 at The Ritz-Carlton New York, Battery Park and $4,550 at The Ritz-Carlton New York, Central Park.

The Carlton on Madison Avenue is offering a package for $454 on Thanksgiving evening, November 22, which includes your room for the night and a traditional three-course dinner for two in The Cafe at Country. Maybe things are different in the south, but we have a lot more than three courses back home for the big day. Package includes cider to go on Thanksgiving morning.

InterContinental The Barclay New York is offering A Right Royal Thanksgiving Brunch with “a proper English style roast beef with Yorkshire puddings, a British cheese board, generous selection of steamed puddings, trifle alongside the traditional apple pie and a wine buffet offering eight different still wines and two sparking wines.” It is $75 a head for adults, children ages 6 to 12 are $15 and children ages five and under are free.

Hotel Plaza Athenee is offering a traditional Thanksgiving dinner in Arabelle for $110 per person. You can feast on butternut squash soup, rosemary Tom turkey, Hudson Valley apple crisp and more.

Zoe Soho and Zoe Townhouse offering a three-course holiday menu with a choice of six appetizers, six entrees and six desserts for $65 per person. For the wee ones, a special three course kid-friendly meal is available for $29 per child under 12 years old. Reservations are available at both restaurants from 1-9pm.

Need to walk off all those extra calories? Special walking tours are available for the holiday as well.

Big Onion Tours (whose name I LOVE) is offering a Post-Thanksgiving Multi-Ethnic Eating Tour. This walk will offer up the “historic and gastronomic delights of the Jewish East Side, Chinatown and Little Italy.” You can learn about the immigrants while feasting on their food. Mmmm. This tour starts at 1:00 p.m. and costs $20 for adults, $17 for seniors and $15 for students. It includes food stops and reservations are requested.

Joyce Gold History Tours is offering The Big Back Yard of the City walking tour on November 23 at 1:00 p.m. If you haven’t guessed, this tour will take you around Central Park to learn more about the history of the first great park in the United States.

The Lower East Side Jewish Conservancy (nycjewishtours.org) will give a
Thanksgiving walking tour on November 18 at 11:15 a.m. The Jewish Community of Colonial New York City tour will include a visit to New York’s first Jewish cemetery (circa 1683) at Chatham Square and sites of Jewish settlement in Lower Manhattan including the early Spanish/Portugese rented synagogues, Mill Street Synagogue, Colonial Revival Houses, Stone Street-home of Aser Levi (Jewish rights activist and first kosher butcher in New York City).

Other things to do. There’s no reason to sit around in your $800 a night hotel will all the activities available for Thanksgiving.

The Institute of Culinary Education (iceculinary.com) will present several courses geared toward the holiday season. On November 5, the school will offer Making the Holidays Easy, from 6:00 to 11:00 p.m. for $100.

While you’re at it, check out the free things to do in New York.