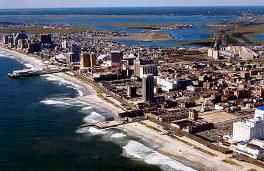 The Atlantic City Express Service offers the only direct train service between New York City and Atlantic City. Tickets are now on sale on both acestrain.com or amtrak.com. Introductory rates will start at $50 for a one-way coach seat and $75 for a one-way first class seat. If you’re taking friends or clients along, you can book the train’s lounge for four passengers where you can lounge and watch the plasma screen TVs. with prices starting at $400, it isn’t a bad deal at all.

“We are excited to open ticketing to the public and welcome those eager to try this new option connecting two great cities,” said Dan Nita, SVP and General Manager of Caesars Atlantic City. “We see ACES as an investment in Atlantic City’s continued growth by making it even easier for New Yorkers to get to explore all the great things our city has to offer.”

Once you arrive in Atlantic City, you can take the complimentary shuttles between the train station and the casinos, including Caesars Atlantic City, Harrah’s Resort Atlantic City and Borgata Hotel Casino & Spa. If you have a return ticket, they’ll take you back as well.

The trip takes about 2.5 hours, with one stop in Newark. I know, most people probably think that sucks but as a part time Newark resident I’m pretty excited. The ACES train will make nine round trips throughout the weekend, offering 300 seats on each train.

The ACES train will officially launch on February 6, 2009.