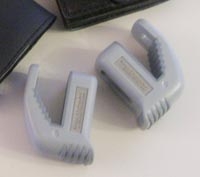 The Knee Defender prevents airline passengers from reclining their seats in front of you. Whether you’re tall and don’t want your knees smashed or you’re working and need the space, the Knee Defender is designed to prevent the passenger seated in front of you from reclining. Maybe it isn’t the nicest thing to do, but I guess sometimes it’s necessary. The product contains notches to allow it to accommodate different seat styles on different aircraft.

The instructions. The instructions are pretty clear, although some are kind of funny. I really like the disclaimer “Listen to Flight Attendants” listed in the instructions for this product. That just seems to be good general advice to avoid being tackled by the Air Marshall in the next row. Also listed in the instructions, “Courtesy among passengers is extremely important. You may want to advise the person in front of you that you are using Knee Defender to help protect against possible damage from a reclining seat.” If you’re going to take the time to tell the passenger in front of you that you’re using the product, you might as well just ask them not to recline their seats.

Bar Review: I spent several hours in the airport bar in Minneapolis in the middle of my review and had a chance to ask some fellow flyers about the product. The Knee Defender actually drew a lot of attention. I don’t know that I would want to use it as I’m afraid of pissing people off, but if I had spent every flight in my life with my knees shoved up to my chest I would probably change my tune. I spoke to a former flight attendant who thought most people would just assume their seat didn’t lean back for some reason, so you may not have to explain yourself if you’re crafty when installing the pieces.

Now they just need to invent a tiny sledgehammer to hit people with when they shove their knees in your back.

Can’t live without it? Get it from Travel Gear Blog.