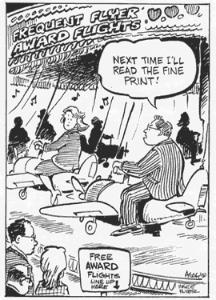 Occasionally business travelers have a need to sell their existing miles. While this doesn’t always agree with the airline’s policies, frequent travelers do on a regular basis. But selling your airline miles can be quite a challenge. Google “selling airline miles” and you’ll get dozens of sites offering to act as brokers between you (the seller) and potential buyers. I attempted to contact several of these, with disappointing results. I was offering to sell 160,000 Northwest miles and 21,000 American miles, as most brokers allow you to enter mileage information for up to four airlines. That’s a pretty wide spectrum of mileage amounts, which made no difference whatsoever.

When filling out the forms, the broker will want to know what kind of miles you’re selling, how many you have, and your asking price. The standard is in the $0.015 (one and a half cents) per mile, which is what I requested.

So after all that I started thinking the whole “sell your airline miles” thing was a scam. However, a colleague of mine recently had a breakthrough. He was able to sell his Alaska Airline miles for a little over $2,000. I’m very happy for him, and a little pissed that I gave away all of my Northwest miles without persisting on the selling subject.

BizTravel Brokers, in Vancouver, Canada was the company that finally got the job done. He filled out the same type of form I mentioned above. The difference being this company called him back. In fact, she contacted him several times before the deal went through. The broker offered to FedEx a check, but ended up wiring the money instead. He received the asking price of $0.015 per mile, which resulted in quite a nice paycheck. My friend had to pay the “fees” out of pocket, but shelling out $10 to receive over two grand isn’t such a bad deal. In addition, the seller has to pay the taxes on the miles, but you should be reimbursed.

How does this work?

The broker is a supplier of information, and the middle man for the money. The seller purchases the ticket, and is provided with the funds from the broker. Your insurance as the seller is that you can always cancel the ticket if you don’t receive your check. That being said, I would make sure you have ample time to get paid before the person travels. Don’t sell your miles to someone leaving tomorrow, unless they’re going to somehow get the money to you first.

That seems to be the gist of it. The only mystery in selling your miles is finding a company who will actually follow up on the information you provide and set you up with a buyer. Good luck!