Traveling With Nuns by Saundra Norton 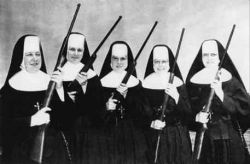 “Poets,” one of the nuns told me in halted English, “Yes, poets are everywhere and they can be very dangerous.”

I was on my way to present a paper at the Ezra Pound International Conference when I struck up a conversation with the nun sitting next to me on the train from Zurich to Genoa.

My Italian, very rusty from years of none-use, was mixed with English, French, and a little Spanish. She asked me about the purpose of my travels. I told her about the poets who were coming from all over the world for a conference in Rapallo, Italy. The nun suddenly looked concerned. She left her seat and came back a few minutes later with
nine of her Sisters in tow.

“Poets” they kept repeating as they surrounded me and followed me off the train when we arrived in Genoa. They went with me to the ticket counter and bought ten tickets so they could all join me on the o ne-hour train ride from Genoa to Rapallo.

When we arrived in Rapallo, the nuns escorted me to the Teatro delle Clarisse near the Rapallo castle on the seafront. One of the conference organizers, fluent in Italian and English, greeted me along with the frantic nuns.

After several minutes of animated conversation, the conference organizer, who was now my translator, explained that there was a misunderstanding. “The nuns,” he said, “theythought you said pirates. They assumed you said pirates are coming from all over the
world to meet in Rapallo, Italy.”

Realizing the mistake, the nuns laughed. One of the nuns pulled me aside. A flashlight appeared from under her habit. She showed me how to make an SOS signal using the light. She told me she would watch for it if I felt I needed to escape, but only nel cu ore della notte, in the dark of night, I understood her to say.

The nun who handed me her flashlight, refused to let go of my arm. The translator explained to her, once again, that there had been a misunderstanding. I was safe. I was not meeting with a group of pirates; they were poets. She shook her head, non fa diff erenza, no difference, she said.