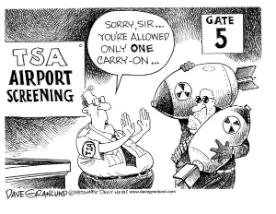 The TSA is getting a whole new “enhanced” checkpoint system, due to the industrious advertisers in the U.S. A 16 month pilot program of ad-sponserd cart, bin and table systems has proven to enhance screening areas and improve travelers’ satisfaction. So, you’re getting a nicer security screening area in the airport because businesses are paying for the advertisements on the gear. Too funny.

The newly approved ad-sponsored system goes by SecureTray System and has been approved for airports throughout the U.S. The funny thing is that I have flown through some of the test sites and the areas seemed pretty nice, but I wasn’t aware they were spamming me with ads throughout the security process. They didn’t even register.

SecureTray System sounds fancy, but all it’s comprised of is a customized rolling cart (used to send bins from the end to the front of checkpoints), two oversized stainless steel tables (affixed to each side of the checkpoint’s existing x-ray equipment), and white bins with advertisements affixed to their inside bottoms.

“Revenue from the sponsorships pay for all the equipment, as well as its installation and ongoing maintenance,” said Joseph Ambrefe, president of SecurityPoint Media LLC; the company that invented the now approved, patented system. “This means no cost to the airport, its passengers or the TSA.”

Some airports get a cut of the revenue, which will hopefully help upkeep the places. I’m crossing my fingers for more free airport wireless.

The SecureTray System supposedly speeds travelers through the security screening area up to 90 seconds faster, based on a study at LAX. The system is also supposed to be more ergonomic for the screeners, reducing back and shoulder injury claims by 90%.

All airports currently participating in the SecureTray system are expected to continue as is. More major airports are expressing interest in it, including: George Bush Intercontinental, William P. Hobby, Orlando International Airport, John F. Kennedy International and Minneapolis-St Paul International.