Turner Heaven: Home of the Braves 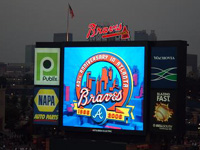 The Braves did it. The one thing they could possibly do to ruin my first game at Turner field in 8 years I attended a few months ago. Actually, there are 2 things they could do, but I learned my lesson at Wrigley earlier this year about the other thing. Anywho, they made it 80’s night. I despise the 80’s with a fiery passion. I’m probably more passionate about my loathing of the 80’s than I am of any other subject in the world. They must have seen me coming.

The Braves lost to the Marlins 2 to 1. After the season they’ve had, I can’t say that I’m really surprised. I do believe I may be bad luck for those guys. Last time I was here, in 1998, they lost to the Oriels. I think I got some pretty decent pictures (as decent as you can get from the $4 nosebleed section without a SUPER powered zoom) of Bobby Cox yelling at the umpire after LaRouche got thrown out of the game. But probably everyone has good pictures of Bobby Cox yelling. That’s what he does.

Andrew Jones, my favorite baseball player of all time, was on the DL like me. I guess the only difference is that his injury is preventing him from major league baseball and mine is preventing me from the Little Rock city softball league and kickball practice. I did get to see him strike out once. Really, I wanted to see him play because I’ve heard scary rumors that he may not be with Atlanta next year. Speaking of which, after seeing tonight’s attendance I wonder how long Atlanta will keep the team. There were a lot of empty seats in the house. The two other games I’ve been to this year (Houston at St. Louis and Milwaukee at Chicago Cubs) were sold out. Turner Field looked to be about half full. And to my dismay, half of those in attendance were wearing mullets.

My final observation from the game is about Renteria. Each baseball players always has a theme song that is played when he goes up to bad. Renteria’s song is some R & Bish song. I have NO problem with R & B, but I always thought his song would be Santeria by Sublime. Get it? Because it rhymes with his name. I’ve heard the song a million times in my head…”I don’t practice Renteria, I aint got no crystal ball…” Maybe he doesn’t know.

Turner Field is really a cool field. Check it out if you get the chance. Parking is horrid, so take the shuttle or a taxi. Taxis to and from any downtown location are set at $8.00 per trip.