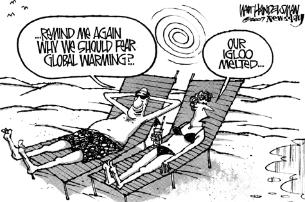 The United Nations has taken a huge step in the area of conservation by finally standardizing the calculation of carbon emission for air travelers. I still think the whole carbon offset deal is a bunch of hogwash, but I’ll keep passing on any new information I receive. The new standard determines how much travelers should have to pay to offset their carbon emissions for air travel.

The Reuters article points out that aviation is in the environmental hot seat because it is one of the fastest growing sources of greenhouse gases. It’s my understanding, however, that it is still a small player in the overall global warming catastrophe. Airlines began offering carbon offsets for travelers about a year ago. Before that, no one knew what in the hell a carbon offset or carbon footprint even was. So, to standardize the deal, the U.N.’s International Civil Aviation Organization (ICAO) launched the new standards for carbon calculation.

“We were very concerned with the proliferation of offsetting schemes,” said Jane Hupe, the chair of ICAO’s environmental unit, referring to airlines including British Airways and Lufthansa, which all used different methods.

The calculator measures carbon dioxide emissions from burning jet fuel, and will ignore other, possibly multiplying warming effects from water vapor and nitrous oxide emissions. It is assumed these multipliers range from approximately one to three times the carbon dioxide emissions of flights alone. The ICAO assumes a multiplier of one. It doesn’t take in to account things like passenger loads and cargo, both of which are a huge contributor to how much jet fuel is burned on a particular flight.

The multiplier is a subject of much debate, and one of the many reasons I’m not a fan of bribing the environment for your bad behavior. At least there is a standard now, rather than you paying whatever amount your airline of choice determines.

Is it mandatory? Of course not. If you’re a logger who drives a Hummer and prefers a private jet, you’re still welcome to screw up the environment as much as you like. But at the rate we’re going, you won’t have long to do it.

The new carbon calculator is at www.icao.int/

If you’re not a fan of carbon offsets, we have some tips on reducing your carbon footprint while traveling. Check out our sister site, the EcoTourism Logue for all the latest and greatest on greener travel.