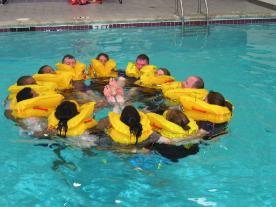 If you’re a regular reader, you know I’ve been very sympathetic to the plight of the airlines in recent months. While I’m not in love with the idea of paying for things like drinks and blankets that used to be free, I would much rather shell out a few bucks than have the airlines go bankrupt and end up stranded in some random city looking for a ride home. That being said, I LOVE this press release by the US Airways flight attendants who are being forced in to the sales industry. Be nice to your flight crews when you travel. These professionals are trained to save your life and deter acts of terrorism, not act as the “sky waitresses” so many people assume they are. I can just about guarantee you that no flight attendant on any flight WANTS to charge you for peanuts or pretzels, they are at the mercy of the companies policy and it’s just plain tacky to use tactics like insisting on paying with large bills just so the crew will be “forced” to comp you when they can’t make change. Anyway, here it is without further comment or interruption:

WASHINGTON, July 31 /PRNewswire-USNewswire/ — As the airline industry continues to be dominated by high fuel prices and passengers face a multitude of fees and extra charges, US Airways management recently made the announcement to charge for non-alcoholic beverages in flight. Beginning Friday, August 1, US Airways will start charging passengers $2 for soft drinks and $1 for coffee and hot tea. Flight attendants at US Airways and America West, represented by the Association of Flight Attendants-CWA (AFA-CWA), are adamantly opposed to this unprecedented decision due to lack of proper planning and poor notification to passengers.

“Rather than charge the fare necessary to produce their product, management has chosen to resort to the tactics of ultra low fare carriers such as Allegiant Airlines and Irish carrier Ryanair,” said US Airways AFA-CWA President Mike Flores. “This model resorts to a nickel and dime approach to the airlines most valuable asset — the passengers. Flight attendants are trained and certified safety professionals, not cashiers to be used in management’s futile attempt to bolster US Airways bottom line.”

Exempt from the charge will be passengers traveling on transatlantic flights and on the US Airways Shuttle. Unaccompanied minors will also be exempt and those with medical conditions will be assessed by flight attendants and offered a free soft drink under what the airline calls “the good judgment of our flight attendants.”

Lisa LeCarre, America West AFA-CWA President representing the Phoenix-based flight attendants of US Airways, reiterated the concerns brought forward to management saying, “Selling these items detracts from the focus on safety for both passengers and crew. While we understand management’s intent to add revenue, this program will put both flight attendants and passengers in a ‘no win’ situation proven by the myriad of problems arising from the Buy-Onboard program currently in place.”

The carrier’s current onboard purchasing has already been plagued by issues such as of lack of inventory, inadequate money change and an unsatisfactory product selection for passengers, adding to additional frustration from an already irritated traveling public. Management plans to install handheld credit card readers sometime in 2009.

“In the current industry of customer frustration, the last thing flight attendants want to do is add fuel to the fire,” said LeCarre.

For over 60 years, the Association of Flight Attendants has been serving as the voice for flight attendants in the workplace, in the aviation industry, in the media and on Capitol Hill. More than 55,000 flight attendants at 20 airlines come together to form AFA-CWA, the world’s largest flight attendant union. AFA is part of the 700,000-member strong Communications Workers of America (CWA), AFL-CIO. Visit us at https://www.afanet.org.

There you have it. I sincerely hope that the current trends in the airline industry change – for everyone’s sake.