When you travel, the last thing you want to do is get in a situation where you need the help of your country’s embassy to get you out of a jam. But if you do get into just such a sticky situation, then you want to be prepared and not panicked. Which is why we occasionally let you know where U.S. embassies are in big cities around the world. This time, we’re talking about the U.S. Embassy in Paris.

The Chancery building is located on the famous Place de la Concorde – it’s near the Champs-Elysees gardens and the Hotel de Crillon. A map of the embassy’s location, as well as the address and hours, are below. 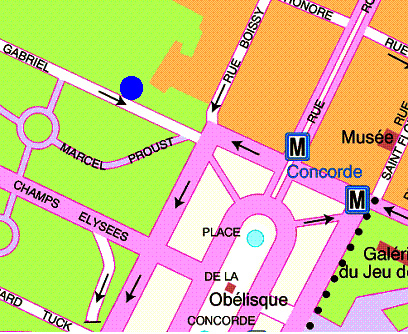 Consular Section of U.S. Embassy in Paris
American Citizen Services
4, avenue Gabriel
75008 Paris
(The consular office is located just around the corner from the US Embassy which you’ll find near the Place de la Concorde and the Champs Elysees rond point.)

Also note that there are strict rules about what you can and can’t bring into the U.S. Embassy in Paris – read them before you arrive, because they don’t even let you bring backpacks into the embassy.