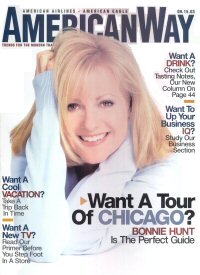 Every year, American Way magazine, the inflight magazine of American Airlines, has a contest to find the greatest road warrior prowling the American highways and hands out some hefty prizes. Even if you didn’t apply for the 2008 American Way Road Warrior Contest, you can still get some free junk for voting for your favorite finalist. Think of it as the American Idol of the airline industry.

The powers that be at American Way recently chose five finalists in the 7th annual contest. Now it’s your job to determine who will win the Grand Prize (2 million Hilton HHonors points and 1 million AAdvantage bonus miles) and Second and Third Prize (great new gear from Bose, Panasonic, and American Airlines Vacations) by casting your vote.

What do you get for voting (besides a little practice for election day)? You’ll be automatically entered into a drawing to win 200,000 Hilton HHonors bonus points and 100,000 American Airlines AAdvantage bonus miles. The drawing will take place December 1, 2008.

Vote at American Way Magazine by Nov. 14 at 11:59 pm CST to be entered to win a few prizes yourself.