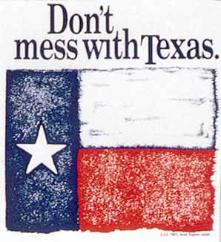 You know how every time you fly the flight attendants are constantly harping on people to get off their cell phones after they close the boarding door? Well, it turns out they mean business.

Earlier today, a Southwest Airlines passenger was cited by police in Dallas, Texas for refusing to get off his cell phone during a flight from Austin. Doesn’t everyone know not to mess with the law in Texas? Apparently this guys has never seen the man Chuck Norris in Walker, Texas Ranger. Or Thelma and Louise.

According to Dallas’ finest, one Mr. Joe David Jones was ticketed for disorderly conduct after his act of attrition. According to Southwest Airlines spokeswoman Brandy King, the flight attendants asked Mr. Jones several times to get off the phone while airborne. I just love how Southwest is always up to something with their clientèle. That’s what happens when you sell your airline tickets cheaper than Greyhound bus fare.

As much noise as we’ve all heard about legalizing cell phone use in flight, it is still an FAA regulation that cellular phones are not to be used during flight. For those of you who wonder why, like Mr. Jones apparently did, it is because there is some concern about interference with the navigation system. To be honest, I didn’t even think they would work on a flight.

It turns out airlines can be fined up to $25,000 for allowing cell phone use, while passengers also can be fined. Keep that in mind next time you just have to make one quick call.