Continental to Start Charging for Extra Legroom in Coach 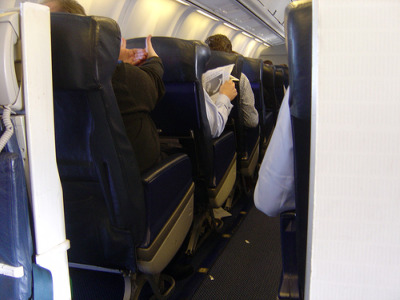 If you’re not lucky enough to be traveling in business class or first class regularly, then that means you’re suffering along with the rest of humanity back in the land of perpetually-shrinking legroom known as “coach.” Some airlines have taken the radical step recently of removing a row or two in economy class in order to give everyone a smidge more room for their knees, but other airlines are only making that precious extra room available to those who’ll pay for it.

The latest airline to announce they’ll sell extra legroom to passengers is Continental. They say that for as little as $60 more than the price of your ticket, you can get a seat in an exit row, which has 7″ more space for your legs than other rows in coach. Anyone on a cross-country flight would pay more than $60, and international passengers would pay quite a bit more. And, of course, if you’re a member of Continental’s frequent flyer program you (and anyone else you’re traveling and have booked your trip with) can upgrad to an exit-row seat for free.

The bottom line is that we are all becoming achingly familiar with all the additional fees airlines are adding onto our tickets, so although the announcement that yet another airline will be charging extra if someone wants a little extra legroom isn’t surprising, that doesn’t make it any less frustrating. The assumption that when we buy an airline ticket the seat that we’re paying for doesn’t come with ample legroom for the average human being – at no extra charge – is ridiculous. The idea that we won’t notice that we’re being nickel-and-dimed to death because the price of the airline ticket hasn’t gone up much is equally silly.

I can’t believe I’m saying this, but I long for the days when an airline ticket actually paid for what you got with it – a reasonably comfortable seat, the ability to check a bag or two, and an in-flight meal (although, let’s face it, the meals were never anything to write home about anyway). I know I’m not alone in wishing the airlines would just raise the price of a ticket a bit and then didn’t try to sneak in extra charges on checked bags, legroom, or – oh my goodness, this is outrageous – blankets; but I also don’t think anything’s going to change anytime soon. The airlines have found their new cash cow, and they’re not letting go.

What do you think? Do you like the new world order of lower prices on airline tickets and then being charged for every little thing? Or would you prefer the illusion of getting things for “free” with a slightly higher ticket price overall? Let us know in the comments.