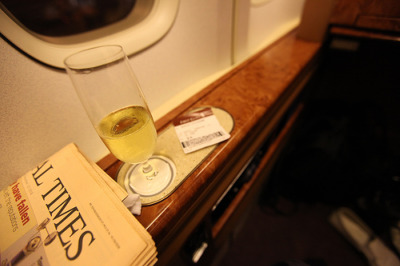 But contrary to what you might think, First Class travelers aren’t all people for whom someone else is footing the bill. Sometimes they’re just savvy travelers who know how to finagle a good deal on a ticket. If you’d like to be one of those people, this collection of articles is a good start.

>> Read more about how to find cheap First Class airfare

Looking at the cost of a First Class air ticket could make you spit your coffee all over the computer screen. But even if you’re able to get a deal on First Class airfare, is it really worth the extra cost? Every airline has a different set of amenities they offer for those flying First Class, but there are some things you can pretty much count on no matter where or what airline you fly.

>> Read more about what flying First Class is like

Okay, so you’ve mastered the art of finding cheap First Class airfare, and you’ve decided that the extra expense of even a cheap First Class ticket is worth it – do you splurge on spectacular service for a domestic flight, or save it for an overseas trip? With more frequent travelers being unwilling to pay through the nose for First Class on short-haul flights, many airlines have opted to eliminate First Class from their domestic flights altogether (there’s usually still a higher class, called Business Class, instead). But those bigger seats “in front of the curtain” are almost always full, even on short flights. So obviously someone’s flying domestic First Class.

There are a few airlines which are known for their stellar First Class service, airlines which have raised the bar and which continue to do so. We have got brief articles on the best of the best here, so click on the following links to read more about:

And if First Class travel is still a little too rich for your blood (or your boss’ blood), why not try Business Class travel instead?