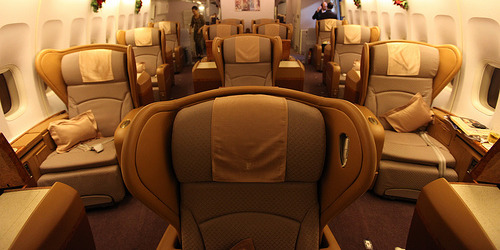 With all the suffering that frequent travel can bring on, there are ways to make at least your flight a lot more enjoyable. The easiest way to do this, of course, is to travel in First Class.

Yes, it will cost more – but with all the miles you are accumulating, it should not be too hard to treat yourself to a First Class ticket every now and then. And if you can get First Class airfare on the company dime, all the better!

But here is the biggest question – is First Class really worth it? What do you get for that extra expense?

First and foremost, the First Class cabin in any airplane is going to afford you loads more personal space. The First Class section generally will fit two seats where economy squeezes three or more, so you can be guaranteed of having more room to spread out sideways in First Class. Additionally, the rows are spaced much further apart, so you will get lots more leg room as well.

Besides the extra space, First Class passengers typically do not have to pay for meals (whereas very few airlines serve free meals in economy class anymore), and those meals are typically of much higher quality than the stuff the coach class passengers are served. Often, alcoholic beverages are complimentary in First Class as well. Entertainment in the First Class cabin is usually much more personal than in coach, and can include (depending on the airline and specific plane) personal movie players on which passengers can watch their choice of a larger-than-in-coach selection of movies and television shows.

First Class passengers are generally allowed to board the plane before the rest of the passengers, and because the First Class cabin is at the front of the plane they are also the first to get off. Because there are fewer people in First Class, there is much more room for stowing carry-on items, sometimes including a closet compartment in which to hang up a coat or other clothing. Many business travelers find that the First Class cabin is also much better for any potential networking that could be done en route from Point A to Point B than the coach cabin might be.

On longer flights, including most international flights, traveling in First Class is especially nice when it comes to sleeping. Most First Class seats recline to a position that is at or near completely flat, which is much more comfortable for getting a good rest than those cramped and nearly-upright seats back in coach! Some airlines are now even offering private suites in First Class, which is perhaps the ultimate in luxurious air travel.

Each airline offers different perks to its First Class passengers, so be sure to check what you get for the money before you spend the extra money on a First Class air ticket.

Too rich for your blood? Try Business Class.

First Class airfare will cost you (or whoever’s footing the bill) a pretty penny, so if there are too many digits before the decimal point but you can’t quite stomach sitting in coach, there is another option – Business Class travel.